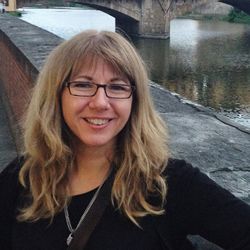 When I was 11, my parents shipped me off to their region in what was then Yugoslavia to spend the summer with relatives. Since then, I haven’t wanted to stop travelling. That long hot summer also set off a lifelong love affair with Eastern Europe, where I return as often as humanly possible. Nowadays, I regularly go to Croatia and Serbia, and can’t resist popping into their former Yugoslav neighbours Slovenia, Montenegro and Bosnia.

I’ve had a parallel love affair with France and Italy too, which I’ve been able to exploit over the past 20-odd years as a travel journalist. You’ll find my articles in UK newspapers including the Guardian, the Telegraph, the Independent and the Evening Standard, and I’m also the contributing travel editor of The Lady magazine. Occasionally I’ll do reports for BBC Radio 4’s From Our Own Correspondent, and I’ve also written and updated numerous guidebooks on France and Croatia for Insight Guides, Berlitz and Frommer’s.

With 1,800km of Adriatic coast and 1,244 islands, you'd expect quite a few decent beaches in Croatia wouldn't you? Well, we've rounded up some of the best (and lesser known).

Secret Provence: 9 villages that are still off the radar

Take a slow road through the hills, olive groves and vineyards on foot (or, better still, on an e-bike) and get to know the quieter side of Provence through these nine villages.

Read moreabout Secret Provence: 9 villages that are still off the radar
Guides

Who needs the expensive beaches of the Amalfi Coast when you've got so much choice and variety – minus the crowds – further south? Discover ten of the best with our expert guide to the region.

Alternative France: 10 cities to tick off after Paris

Everyone loves Paris – and with good reason. But France is a big country, with so many incredible cities to explore. So, why not give the capital a miss in favour of these villes magnifiques instead?

While Rome can be expensive, there are many ways to save money during your visit to the Eternal City. From free water fountains to when to eat, we reveal the savviest ways to save.

Jolly good: 10 of the best places to spend Christmas

Whether they're draped in lights or dusted in snow, these cheery cities seem to just get Christmas. So why not make it one to remember and spend the season abroad?

Read moreabout Jolly good: 10 of the best places to spend Christmas
Read more from the blog