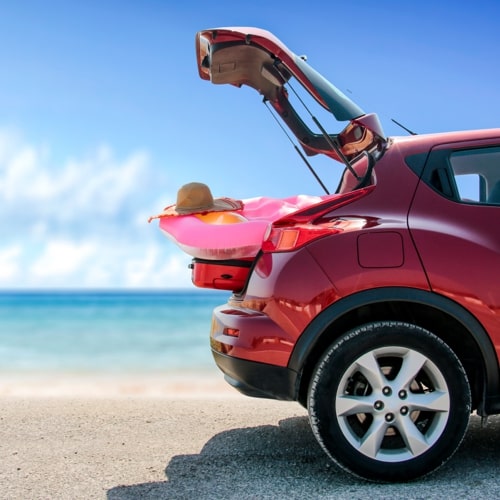 Murcia is a gateway to hikes in the Sierra Espuña, beach time on the balmy Costa Calida, and countryside dotted with vineyards, golf courses and remote castles. Pick up a hire car at Murcia Airport and enjoy unlimited access to all of it.

You'll find a selection of car hire brands at Murcia Corvera Airport (RMU), including well-known companies and a few local options that often have cheap deals. Once you’ve picked up your rental vehicle, it takes around 40 minutes to drive to Murcia city centre.The pick-up offices at Murcia Airport are located either in the terminal next to the luggage hall or outside the terminal building in the short-stay car park.Car hire companies that have desks at Murcia Corvera Airport include:

If you’d rather explore Murcia without a car for a few days and then venture out to the surrounding region, it’s simple to find a cheap rental deal in Murcia itself. You can find Avis at Murcia del Carmen station, and Thrifty, Enterprise and Hertz close to the N-301 highway out of town.

Driving in Murcia is usually a breeze thanks to the modern road system and great signposting. Traffic is not normally a problem, although you may find the roads are busier on weekends when locals are doing their shopping or travelling to and from sports fixtures at the football stadium.

As you reach the city's historic core, narrow streets and one-way systems begin to pop up – so set your sat-nav for one of the large underground car parks, such as Parking Murcia Centro, beside the Parroquia de San Lorenzo church; Parking Avenida Libertad, a little closer to the modern shopping district; and Parking Subterraneo Murcia, near the city hall. You can then explore on foot. On-street parking is usually cheaper, but good luck finding it.

If you’re venturing out of Murcia itself, you’ll find several excellent dual carriageways that link it to other cities along the coast and further inland. Follow the A7 southwest to reach Lorca, and the A30 south to reach Cartagena, the heart of the Costa Calida.

Located around 70km (43 miles) from Murcia, historic Lorca has the same blend of Muslim, Jewish and Christian influences that you see all over southern Spain. It may not have the showstoppers of Granada or Seville, but it's still a pleasure to explore. At the city’s highest point you’ll find the medieval Fortress of the Sun (aka Lorca Castle), and a little way below it is an ancient synagogue – something of a rarity in Spain, where most were turned into churches in the 15th century.

For a coastal escape with some wildlife watching thrown in, head to Mazarron Bay. You can watch pilot whales and dolphins year-round here, and there are occasional sperm whale sightings too – the marina is full of operators who will take you out on a guided expedition. Grab a seafood lunch on the pretty harbour front (fresh caught monkfish and grouper are popular) then head to the beaches for sunbathing and snorkelling.

For a more active day at the beach, try Águilas. It has sandy beaches and opportunities for windsurfing, paddle boarding and diving. After you've got active, check out the well-preserved Roman baths, or climb to San Juan de las Águilas Castle for panoramic views of the town and the coastline.

Discover more on our blog

Read moreabout Revealed! The cheapest time to book a hire car is...

7 car hire rip-offs and how to avoid them

Read moreabout 10 Spanish cities to tick off after Barcelona

Secret Spain: How to escape the tourist trail

Read moreabout Secret Spain: How to escape the tourist trail
Read more from the blog