Search all the top booking sites - in one place

No booking fee, no mark-up

Amsterdam is a patchwork of unique neighbourhoods all nudging up against one another.

Each area has a buzz all of its own, from the ‘it’ bars of arty Jordaan to the stately mansions of Oud Zuid and the intellectual dens of De Pijp.

If you’re on the hunt for the ideal Amsterdam hotel, the city is bound to offer the perfect fit somewhere.

Steeped in the atmosphere of the Dutch Golden Age, you’ll find characterful places to stay here, from cosy three-star B&Bs to grand five-star hotels. Family hotels are also in abundance at the water’s edge.

Nothing beats an early morning wander around the canals before the city springs into life and the tourists descend.

The epitome of true Amsterdam style, the Flying Pig Downtown hostel is the ideal base for seeing one of Europe’s most intriguing cities on a budget. At its heart, it’s a party hostel, so expect plenty of socialising in the bar! Breakfast, bed linen and wi-fi are included in the price.

This charming family-run hotel is located in a 19th-century townhouse on a quiet street in Amsterdam’s leafy western suburb Oud-West. It’s close to the sprawling Vondelpark, which regularly features theatre, and is ideal for those looking for an affordable three-star option in the city.

Or you could spice things here up by forgoing a cheap hotel in the city centre and renting a traditional houseboat instead. 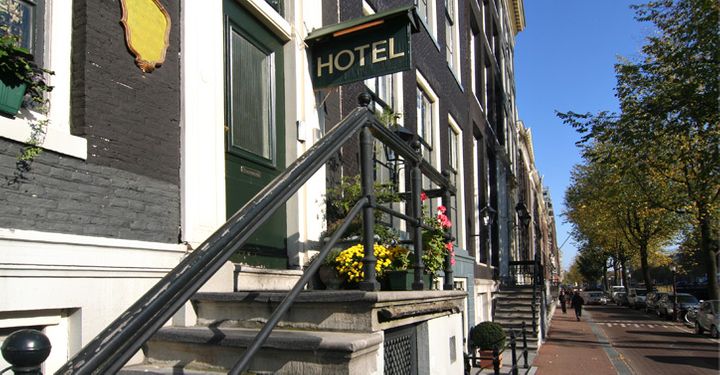 Staying with the family

Spacious yet stylish, Amsterdam ID Aparthotel offers convenient accommodation for families visiting the city. Located in Westpoort, the hotel is served by good transport links to the centre. Rooms feature a well-equipped kitchenette, in-room dining area, a refrigerator and a coffee maker as well as free wi-fi.

If you're looking for a last-minute option

Central Hotel CC is all about location, location, location. Situated bang in the centre of Amsterdam, you’re close to the city’s major sights, including Anne Frank House. Just a three-minute walk from Central station, it’s a convenient option for a last-minute Amsterdam city break. Features include complimentary wi-fi, flat-screen TVs and tea and coffee making facilities.

If money is no object...

A splendid five-star hotel located in Amsterdam’s historic centre, the Grand Hotel Krasnapolsky is among the best luxury hotels in the city. The rooms are elegant and tasteful and feature offer complimentary wi-fi, flat-screen TVs and minibars. Its convenient location means you’re just a few minutes’ walk from major attractions such as Anne Frank House and the Rijksmuseum.

Perfect for pushing the boat out – no pun intended – this upper crust neighbourhood is a medley of luxury Amsterdam hotels, top-notch restaurants and leafy grand avenues. Posh doesn’t even begin to cover it.

Stretching from the Vondelpark to the Museumplein in Amsterdam city centre, it is safe, sophisticated and within walking distance of all the major sights.

Popular with chic weekenders and shopaholics, this is serious splurge territory, with all kinds of upmarket four-star hotels and luxury hotels. If you’re out to show your credit card a good time, run the designer gauntlet along PC Hooftstraat, Amsterdam’s answer to Rodeo Drive.

Bordering the canal belt, the Jordaan is Amsterdam’s most famous neighbourhood. Once a working class hotbed of revolutionary thinking, this tangled maze of streets is home to all kinds of hole-in-the-wall bars, concept cafés and hidden art galleries.

Unlike most trendy hotspots, it has none of the too-cool-for-school attitude, making everyone feel welcome. Mixing the best cheap hotels in Amsterdam with smarter digs, it’s a winner.

The current rising star in Amsterdam is De Pijp, an old district enjoying a new lease of life.

It’s an area on the up, with new organic cafés and boutiques opening their doors every day. It’s a multicultural melting pot of Surinamese, Spanish and Turkish delis as well as restaurants from all over the world.

The ethnic mix has turned De Pijp into Amsterdam’s street-food heaven, making it perfect for a gourmet getaway. While De Pijp is on the up, it’s still a great place to find a cheap hotel in Amsterdam in 2022. Go before gentrification pushes prices through the roof.

For a totally different take on the city, book a designer pad in Noordelijke IJ-oever, hopping on the free ferry over to the Noord from the waterfront exit of Amsterdam Centraal Station.