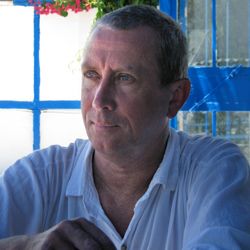 I spent five happy student summers bumming around Europe and the Mediterranean, from Marrakech to the foothills of Mount Ararat by way of France, Spain, Portugal, Greece and the Balkans travelling by bus, train, thumb and rust-bucket ferryboat. I still claim the world record for the fastest hitchhiking journey from Athens to Edinburgh – just under 2,500 miles (4000km) in four and a half days. Beat that.

I slept on Greek island beaches, in olive groves, in an Austrian hay barn (big mistake for an allergy sufferer) and, on one memorable occasion, a chicken shed in Yugoslavia.

Edinburgh University sent me on my way with a history degree and no career plans. Journalism – a profession that requires no more skills than a way with words and certain rat-like cunning – beckoned. I got lucky. After two years learning the ropes at local newspapers, I moved to London and landed a gig with a travel industry newspaper that flew me around the world on expenses for the next ten years. To keep myself from taking first-class flights and five-star hotels for granted, I spent my holidays island-hopping around the Aegean on the cheap.

Going freelance let me go off-piste to destinations like Myanmar, Ethiopia, Sulawesi and Ladakh before they joined the mainstream.

These days, I favour destinations closer to home. I love the cities of Spain and Italy, the country villages of France – and, of course, the wilds of my native Scotland. My latest fave raves – cities I'd never visited before – include Marseille, the funkiest city in France, Bologna, where I loved the food scene, and Oporto. I do like fluffy bathrobe and a room with a view, so I enjoy my work reviewing some of Europe's classiest boutique hotels for The Hotel Guru and Telegraph Travel – but yes, I do check my privilege, and I'm as happy (or even happier) in a simple village guesthouse as in the gilded cage of a posh resort.

How to do the Greek islands on a budget

Sun-kissed, beautiful and full of history, the Greek islands are an inspired getaway – and you don't have to break the bank to visit. Here's how to keep it cheap and cheerful.

The rolling hills, wooded valleys and windswept shores of this region deserve more than a cursory glimpse from your car window. Stay a few days and discover fine food, hidden histories, coastal walks, and more.

Must-read: Are city passes really worth it?

City passes can offer savings, but do they live up to their claims? We've checked out some of the best passes for your favourite cities to see just how much money and time they can save you.

Read moreabout Must-read: Are city passes really worth it?
Read more from the blog
Discover more on our blog
Inspiration

8 weird and wonderful secret islands across the globe

Want to escape the crowds on your next holiday? No matter how far you want to go, we'll help you find your very own secret isle in the Med, the Caribbean, the Indian Ocean and the Java Sea.

9 of the world’s best kid-free resorts and hotels

If you’re looking for a quieter break, we’re here to help. From Ibiza to the Dominican Republic, we’ve picked some top spots in Europe and beyond where you can take a break with only other adults for company.

Eat your greens: The best destinations for vegetarians

For vegetarians, finding a meat-free meal on holiday can be a headache. But it’s not impossible. We pick some destinations that serve veggies surprisingly well – and some you may want to avoid.

Read moreabout Eat your greens: The best destinations for vegetarians
Read more from the blog