Newquay has everything you could want in a cheap British beach holiday. With brilliant beaches, accommodation for all budgets and loads of fun activities, there’s a reason it’s one of Britain’s most-loved coastal towns.

Eternally popular with families, surfers and pretty much anyone who loves the beach, Newquay sits on a stunning stretch of Cornwall’s North Atlantic coastline. All sea cliffs and sandy bays, its surrounding beauty is the main reason happy travellers keep coming back, year after year.

Sure, it’s not everyone’s cup of cream tea – the raucous nightlife and souvenir shops can be a turn-off for some – but Newquay doesn’t pretend to be anything other than what it is: a classic bucket-and-spade resort town built for tourism. For a week or two of fun by the sea, you can’t really beat a staycation in Newquay.

With beaches, surfing, arcades, amusements and more, Newquay doesn’t really do boring – which is probably why it never seems to lose its mass appeal, year after year. Whether you’re travelling with kids or as a couple, a staycation in Newquay can be as relaxed or as active as you like.

You can’t visit Newquay, one of Britain’s most iconic surf towns, without testing yourself out on the waves. In these parts, it’s a rite of passage.

Don’t worry if you’ve never done it before, there are plenty of local schools in the area, such as Quicksilver Surf School and Fistral Beach Surf School, who run classes for young kids, teenagers and adults.

Besides surf and sand, weekend breaks in Newquay are perfect for walking. Blessed with beautiful surrounds for miles either side, you’ll find sea cliffs, sandy beaches and tucked-away coves. The town sits on the South West Coast Path, so it’s easy to head out on a spectacular walk. 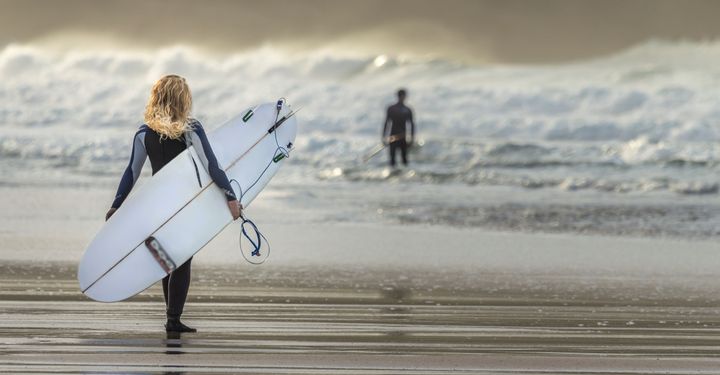 Aside from the obvious (that’s surf lessons and the beach), Newquay is jam-packed full of stuff to keep the kids occupied. Like all good British seaside towns, there’s a healthy amount of amusement arcades dotted around the seafront – so stock up on those coppers before you arrive.

For more non-beach activities, there’s swashbuckling fun abound at Pirate’s Quest, a live-action, interactive adventure show about Cornwall’s pirate past. Feeling a little wild? Get up close to the king of the jungle at Newquay Zoo, or go looking for Nemo at the Blue Reef Aquarium.

A half-mile stretch of golden sand backed by Cornish cliffs, Fistral Beach is Newquay’s biggest and best known. Famed for its awesome waves, Fistral draws surfers in their thousands every year and hosts some of the biggest contests in British surfing.

Closer to the town centre, you’ll find Towan Beach, a very popular spot during the summer, and nearby Tolcarne Beach, which is perfect for a bit of bodyboarding action. For something a little quieter, head to Porth on the eastern fringes of Newquay or, around three miles out of town, Watergate Bay Beach, which is popular with families and surfers.

Best restaurants and bars in Newquay

From pub grub and fish and chips to trendy bistros, Newquay’s got plenty of options for a good feed.

If seafood is your thing, you’ve come to the right town. Try any one of Harbour Fish and Grill, The Fish House or The Lusty Gaze Beach Restaurant. Planning a long day out in the surf? Fill up first on the all-day breakfast at Bodhi’s Beach Cafe and Bistro.

For drinks, try either the Central Inn or the Fort Inn, two modern pubs in the centre of town. Tom Thumb, meanwhile, is one of the Newquay’s best independent bars and comes with a lofty rep for cracking cocktails.

The Huer's Hut, high up on the headland above Fistral Beach, might be the most curious attraction in Newquay. A relic from the town’s pilchard fishing heyday, the huer would watch out for arriving shoals of fish, and cry out to alert Newquay’s fisherfolk. Hike up to the hut for awesome coastal views.

For more history, head out to Trerice, a 16th-century manor house with wonderfully preserved period interiors. If you’re visiting with kids, combine it with a ride through Lappa Valley on a miniature steam train. If nature’s more your thing, check out the Bedruthan Steps, a tiny National Trust beach known for its granite sea stacks.

For the best weather, July and August are the top months for a holiday in Newquay. Expect average highs of 19C (days in the 20s aren’t unheard of, either), and the lowest chance of rain all year. For surfing, May, July, September and October are your best bets.

When is the cheapest time to visit Newquay?

Newquay is a seasonal town. Outside of the peak summer months or the school holidays, the prices drop considerably. Winter is likely to be the cheapest time to visit Newquay, but unless you’re a surfer, it’s probably not worth it. For families, book well in advance, either at the very beginning or at the very end of the holidays.

If you want the best chance of good weather, without the crowds and steep prices of summer, then you’ll want to look at May, June, or September. In terms of average highs, June and September are the warmest (around 17C). Go for late summer if you’re keen on the beach – the sea will be much warmer.

With holiday parks, seaside hotels and caravan parks galore, Newquay is perfect for a British staycation. Most families opt for the areas close to the beach, such as Pentire (near Fistral) and Porth (Lusty Glaze and Porth). As well as the great location, these areas tend to be a lot quieter – the centre can get a bit busy in the summer as stag and hen dos descend on the town centre. If you want things even more relaxed, there’s plenty of accommodation south of Newquay around Crantock and Quintrell Downs.

While Newquay isn’t exactly renowned for its romantic vibes, there’s still plenty of choice for holidaying couples. If you’re looking for somewhere relaxing, surrounded by scenic coastal cliffs and tiny beaches, look towards Porth. It’s just a 15-minute walk away from the centre, plus it’s a great starting point for walks up the coast. Surfer couples might want to stay in Pentire, which is just under 20 minutes’ walk from Fistral Beach.

For those who love nightlife, take your pick anywhere in the town centre. There are bars galore around Fore Street and Beach Road.

For a weekend break

If you’re only in Newquay for a weekend break, you’ll want to stay as close to the action as possible – especially if you’re getting the train down to Cornwall. For stags and hens, the town centre is the best bet, close to all the bars, clubs, pubs and restaurants.

Alternatively, if your goal is to avoid all that, the harbour area is a little quieter. Porth is a good option if you’re only interested in the beach, and it’s less than 15 minutes’ walk from town. For surfing, try Pentire, a 20-minute walk from Fistral Beach.

For travellers on a budget

Trying to keep things cheap? The whole of Newquay is practically your oyster. The sheer amount of choice means that pretty much everyone is catered for. Tent pitches and caravans, surf hostels and family-run B&Bs, chain hotels and holiday lets… whatever you’re after, there’s a good chance you’ll find it here.

Naturally, the cheaper stuff tends to be further away from the seafront, but that’s not always the case. A cheap holiday in Newquay shouldn’t be too hard to find if you book early and are prepared to shop around.

You’ll find holiday cottages all over Newquay and its surrounding area. If you want things a bit quieter, but still close to the town, look around Porth and Towans beach. Pentire, Crantock and West Pentire, just south of town, are quieter still, but you’ll need a car to get around.

Newquay has plenty of holiday park accommodation. Mostly, you’ll find them spread out across the surrounding countryside, between the areas of Porth, Trevemper and Crantock, but there are a few close to town, too.

Is Newquay expensive to visit?

Newquay isn’t known for being an expensive place to visit. In fact, it has a wide range of accommodation options, which helps keep prices affordable, even in the summer.

How do you get to Newquay without a car?

The best way to get Newquay without a car is by train. Trains run from many cities, including London, Manchester and Birmingham – most services from further north will run through one of these cities.

Do you need a car in Newquay?

You don’t need a car to get around Newquay itself, but if you plan to explore the surrounding area, or are visiting Newquay as part of a multi-stop holiday, renting a car will definitely make things easier.

How many days should you spend on Newquay?

If you’re planning a longer British beach holiday in Newquay, you’ll want at least seven days – maybe even two weeks (especially if you’re there to surf). As a stop on a longer Cornwall holiday, three days is more than enough.

Are there coronavirus travel restrictions to visiting Newquay?

Coronavirus restrictions vary from region to region. For the latest advice, check the Cornwall Council website before you book.

10 of the best places to visit in Cornwall

With white-sand beaches, pretty fishing villages and a footpath that hugs a dramatic, craggy coastline, Cornwall's got all the ingredients for the perfect summer break. Discover the best of it here.

From walks and watersports to historical sites and art aplenty, our guide to Cornwall's best-kept secrets will help you find a slice of calm away from the summer staycation crowds.

Cornwall and Devon tend to steal the spotlight when it comes to beach breaks in the UK. Visit these excellent sandy stretches from Woolacombe to Porthcurno and it won’t be long until you discover why.