Cobbled alleys and slate roofs, sandy white beaches and blissful blue bays, quaint old pubs and classic chip shops – St Ives is everything we love about the British seaside, wrapped up in a distinctly Cornish package.

Of all Cornwall’s coastal towns – and there’s a fair few to choose from – St Ives might just be the prettiest. Beyond its three beautiful main beaches, Harbour Beach, Porthmeor, and Porthminster, St Ives has a rich arts scene centred around Tate St Ives and the Barbara Hepworth Museum. Inspired by the idyllic coastline, Hepworth made St Ives her home in the late 40s and never left. Over time, other prominent artists were drawn to the town, and today its tiny streets are packed with private galleries and studios.

Whether you’re passing through on a longer trip, or are visiting on a weekend escape from the everyday, holidays to St Ives offer the perfect mix of coastal Cornwall’s staggering beauty and deep-rooted culture.

Surfers, sculptors, seafood lovers – St Ives has that rare knack of being able to please almost anybody. Between beaches and coastal walks, family activities and contemporary bars, you’ll be able to pack plenty into your St Ives staycation.

If you’re only in town for a weekend break, make Tate St Ives your first stop. The gallery houses a brilliant collection of modern art, including works by Hepworth, Picasso, Wallis and Matisse. The Barbara Hepworth Museum and Sculpture Garden, just outside of St Ives, is another must visit. A joint ticket gets you into both galleries at a reduced rate.

St Ives has some brilliant surf, and, during the summer, Porthmeor beach is particularly good for beginners who fancy a lesson. Don’t feel like getting wet yourself? Take a sea safari out to Seal Island, instead.

With three lovely beaches, most family holidays to St Ives start by the sea (more on that below). Beyond that, there’s loads to keep kids of all ages occupied for a few days.

St Ives surf school offers lessons for children, as well as coasteering and kayaking. For a rainy day, the St Ives Museum and St Ives Tate are brilliant options, while Barnoon Craft Workshop is great for creative kids. If you’ve got a car, classic theme park Flambards is just 30 minutes away. Alternatively, take a walk along the cliff tops at Godrevy for some seal spotting.

St Ives has three soft, sandy beaches within easy walking of the town centre. Tiny Harbour Beach sits at the foot of the old town, sheltered by the pier wall and perfect for kids. On the west side of the peninsula, Porthmeor is a popular for water sports, including surfing, paddle boarding and kayaking. The third, white-sand Porthminster is only a 20-minute walk west of St Ives, where you can also try out a variety of water sports.

Sitting on a peninsula with the Atlantic on all sides, there are no prizes for guessing the sort of food that dominates menus in St Ives.

For something a bit special, check out Porthminster Beach Café, Seafood Café or The Cellar Bistro. Cheap and easy fish and chips can be found at any one of Harbour Fish and Chips, The Harbour St Ives, The Beach Restaurant, or Albatross Fish and Chips.

After a pint with a dose of Cornish culture? Get down to the Sloop. Supposedly one of the oldest in Cornwall, it’s got plenty of local character and Cornish ale. For cocktails, try Rum and Crab Shack.

From late June to the end of August, St Ives regularly hits the 18C mark; with plenty of sunshine to boot, it can easily feel like the low 20s. In addition, June and July barely see any rain. One thing to bear in mind, though: St Ives gets year-round winds, which, while great for surfing, can make it feel slightly cooler than other parts of Cornwall.

When is the cheapest time to visit St Ives?

Thanks to its year-round art scene, there’s no bad time to visit St Ives if culture’s your thing. The colder months, November through to February (excluding Christmas) are generally cheaper, while March and early April also offer some decent deals with a better chance of a few sunny days.

September can still have brilliant weather and the crowds will be long gone, making cheaper accommodation easier to find. On the flip side, late May and early June can be similar, although the weather is less predictable, and the sea temperature will be much colder (around 15C).

Being so small, there isn’t really a bad place to stay in St Ives for families. If your little ones are very young, you might want to pick a spot right in the centre of town – that way, you’re never too far from the hotel if you need to get home quickly.

For families with older kids, the areas behind Carbis Bay Beach and further east behind the Towans, offer a nice mix of beach and space. On top of that, these two areas are closer to Godrevy, which is great for walking and seal spotting.

For slate roofs, cobbled lanes and fisherfolk’s cottages, stay in the old centre – by far the most romantic part of St Ives. Visiting for surf and want to be the first pair in the waves? Pick a place as close to Porthmeor Beach as possible.

On the other hand, if you like things a little quieter and don’t mind a walk, opt for Carbis Beach Bay or anywhere around Treloyhan. Alternatively, there are lots of options in the surrounding countryside if you don’t mind driving into St Ives. Just beware that parking can be difficult during peak times. 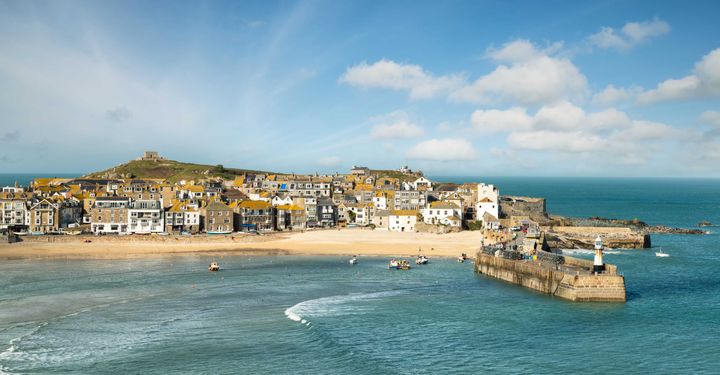 For a weekend break

If you’ve only got a couple of days to play with, you’ll want to book a hotel in the town centre (the area behind the old harbour). It’s not that St Ives is particularly massive – actually, it’s tiny – but this puts you in comfortable walking distance to all the major attractions, pubs and restaurants.

For those getting the train, the area around the station has a couple of hotels, and it’s only a 20-minute walk to St Ives proper. Here, you’re also close to the beach.

For travellers on a budget

While St Ives isn’t exactly known as a bargain basement destination, there are a couple of options for travellers on a budget. Camping is the cheapest option by far, and you’ll find campgrounds all over the surrounding countryside. For hotels, generally speaking, the further away from the town centre you get, the cheaper it’s likelier to be.

If you want to stay in the heart of St Ives, amid the slate roofs and cobbled lanes, expect to pay a premium. Instead, look at staying villages, such as St Erth and Hayle, which are slightly further away but connected to St Ives by train.

For glamping in St Ives, you’ll find a number of campsites in the countryside surrounding the town. There are also couple of options around Treloyhan and Carbis Bay, a 40-minute walk away from St Ives. If you have a car, some of the campsites behind the Towans Beach have glamping as well.

There are plenty of holiday cottages in St Ives. You’ll find them all over the centre of town, as well as in the outskirts near Ayr. East of town, you’ll also find cottages in Treloyhan and Carbis Bay. It’s just over 40 minutes’ walk to the latter, and there’s also a train.

Is St Ives expensive to visit?

St Ives is known for being expensive. To stand the best chance of finding a good deal, book early and avoid peak travel times, such as the summer holidays, Christmas and Easter.

How do you get to St Ives without a car?

To get to St Ives without a car, you can take the train from London Paddington, or Birmingham New Street. Most trains will pass through one of these cities on route.

Do you need a car in St Ives?

If you are planning to explore beyond St Ives, you may want to hire a car. The town itself is very small, so if you’re only spending a few days here, a car isn’t necessary.

How many days should you spend in St Ives?

A weekend is more than enough to see everything St Ives has to offer. If you want to explore the surrounding area, you may want to book 3 or 4 days.

Are there coronavirus travel restrictions to visiting St Ives?

Coronavirus restrictions vary from region to region. For the latest advice, check the Cornwall Council website before you book.

Discover more on our blog
Secret Cornwall: How to escape the tourist trail

Read moreabout Secret Cornwall: How to escape the tourist trail
10 of the best places to visit in Cornwall

10 of the best places to visit in Cornwall