Scotland packs an awful lot of variety into quite a small package. Whether you're looking for a romantic weekend break for a two or a longer family holiday, you'll find it here.

It's hard not be seduced by the urban buzz of Edinburgh and Glasgow, with their wealth of historic and cultural heritage, fab food and great nightlife. But reach beyond Scotland's heartland cities to discover tranquil lochs, rushing rivers, verdant forests and windswept moors perfect for an adventurous staycation.

Lovers of the great outdoors will find scenic grandeur in pockets wilderness in the Cairngorms National Park and beyond. To stretch your legs, there are marathon hiking routes, challenging mountain ascents and easy-going city strolls.

History stretches back for millennia here too – you can visit grand clan castles such as Inveraray and Dunrobin, and incredibly ancient places such as the standing stones of Calanais or the Stone Age village of Skara Brae in Orkney.

There's a mouth-watering menu of things to do on a family holiday or a weekend break in Scotland's cities, around its shores and among its wild and lovely hills, lochs and glens.

When it comes to weekend breaks in Scotland, your best bets are its biggest cities, Edinburgh or Glasgow, if you’re travelling from elsewhere in the UK. On a weekend break in Edinburgh, you can pack in a stroll in the leafy Botanic Gardens, a visit to the royal Palace of Holyroodhouse, lunch al fresco on Edinburgh's waterfront, and dine by candlelight dinner in a Michelin-starred restaurant.

From Edinburgh, you can even work in a day trip to the nearby Borders, where you can visit the graceful ruins of Melrose Abbey, tour Sir Walter Scott's mansion at Abbotsford and marvel at mysterious Rosslyn Chapel.

In summer, the Hebrides offer the most romantic staycation breaks in Britain: stroll hand in hand along miles of sandy beaches on Skye or Lewis, watch a spectacular sunset over the Atlantic, or sample fine seafood and sip malt whisky in front of a roaring log fire on Islay or Jura. 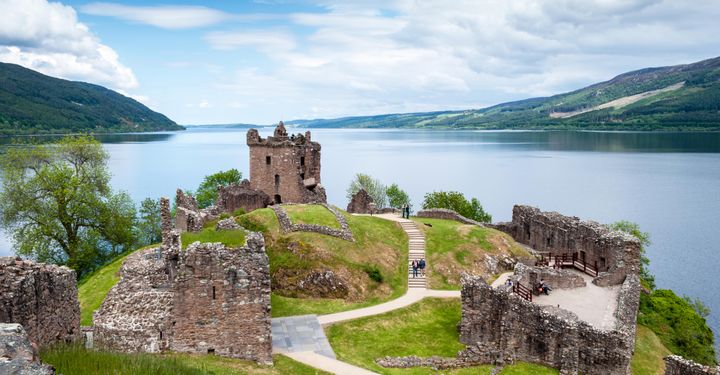 Wee visitors tend to like Scotland’s epic labyrinths, such as the maze at Traquair House in the Borders and the Murray Star Maze at Scone Palace. Adventurous older kids can learn white-water rafting skills on the River Tay at Aberfeldy and dare the breathtaking Highland Fling Bungee plunge at Killiecrankie.

For wildlife encounters, families can take a whale-spotting boat trip around Mull, go dolphin watching from Inverness, or watch playful dolphins from dry land at the WDC Dolphin Centre at Spey Bay. Young monster hunters can set off in search of the Loch Ness Monster with Cruise Loch Ness or Jacobite Cruises – a super family day out, even if the mythical beast fails as usual to put in an appearance.

For rainy days, Scotland has lots of indoor family attractions such as the Glasgow Science Centre and Museum of Transport. In Edinburgh, visit the Museum of Scotland with its amazing collection ranging from dinosaur skeletons to ancient treasures, and Dynamic Earth with its state-of-the-art displays and brand new digital planetarium.

Walkers have loads of options in Scotland. The easy-going Water of Leith Walkway, which passes through Edinburgh, follows the whisky-coloured Water of Leith for 20km (12 miles) from Balerno to Leith on the Firth of Forth. On the way, it passes through the quaint urban enclaves of Dean Village and Stockbridge, ending at a waterfront lined with great places to eat and drink. Feeling footsore? You can hop on a bus anywhere along the route.

Both the John Muir Way (214km; 134 miles) and the Fife Coastal Path (188km; 117 miles) equally easy-going. The former runs between Helensburgh on the Firth of Clyde and the sandy bay of Dunbar on the North Sea, along canal towpaths, woodland trails and farm tracks. The latter passes long sandy strands and fishing villages between Kincardine and Newburgh.

The West Highland Way is the big one – a 154km (96-mile) yomp from the outskirts of Glasgow and around the shores of Loch Lomond over rugged terrain to Fort William, in the shadow of Ben Nevis. Unless you're super-fit you'll need at least ten days to complete it in one go.

Best restaurants and bars in Scotland

Scotland used to be notorious for its taste for deep-frying everything from haddock to pies, haggis and Mars Bars. Today, though, it's a foodie's delight, where top chefs create imaginative dishes from fine local produce, ranging from superb seafood to Borders lamb and Angus steak. For fine dining, try Michelin-starred The Kitchin, Number One and Condita, all in Edinburgh; Cail Bruich in Glasgow; Peat Inn, Fife; and the Loch Bay Restaurant on the Isle of Skye.

When you don’t want to max out your plastic, try the Ubiquitous Chip in Glasgow, a long-established landmark gastropub with a Scottish-flavoured menu that belies its name. Rogano is another Glasgow favourite. In Edinburgh, The Shore is a super bar-cum-restaurant overlooking the Water of Leith, while Tom Kitchin's Scran & Scallie is all a gastropub should be.

For a tasty pint, head to the Café Royal in Edinburgh (you can get a great seafood platter too), or stop in on the tiny Bow Bar for its compendious choice of whiskies. For live folk music with your pint or dram, drop in to Sandy Bell's. There's more live music in Glasgow at bar venues like Òran Mór and at the legendary King Tut's Wah Wah Hut in Glasgow, which helped to launch rock gods such as Oasis, Pulp, the Manic Street Preachers and Biffy Clyro.

Some of Scotland’s top attractions are in Edinburgh. A visit to Edinburgh Castle plunges into Scotland's history, from the 12th century until the days of Bonnie Prince Charlie. At precisely 1pm daily, the One O'Clock Gun booms from the battlements.

Then, you can stroll down the historic Royal Mile to the Queen's Edinburgh residence, the Palace of Holyroodhouse. Inside the splendid 16th-century palace are royal portraits and other treasures. In nearby Leith, is the Royal Yacht Britannia. The former official royal vessel is another must for monarchists.

Elsewhere, Kelvingrove Art Gallery and Museum, a world-class treasure trove of paintings by Dutch, French and British artists, is Glasgow's top cultural attraction and Inveraray Castle, the grand seat of the Dukes of Argyll, reveals the history of the Campbells, Scotland's most powerful Highland clan.

Scots say there's no such thing as bad weather – just the wrong clothes. You'll get the best weather in summer though, when temperatures average around 18C and can sometimes reach 25-30C. Scotland has more daylight hours than the rest of the UK this time of year too – up to 18 hours a day in the far north at midsummer – so you’ll have plenty of time for sightseeing. The best winter sports conditions on Scottish slopes are often in March and April.

When is the cheapest time to visit Scotland?

For cheap weekend breaks in Scotland, think about visiting Edinburgh or Glasgow in spring and early summer, and avoid Easter and summer school holidays. It’s the same story for other staycation spots – early spring, late autumn and winter are generally cheaper.

Edinburgh is busiest during the Edinburgh International Festival, so avoid August if you're looking for a cheap weekend break. Prices also jump over Edinburgh's Hogmanay (December 31) and during the Six Nations Rugby Tournament in February and March.

Late spring and early autumn are your best bets for a good mix of decent weather and lower prices, but you’ll need to book well in advance to snap up a bargain.

Edinburgh is the best place to stay in Scotland for a romantic weekend break. You have an amazing array of attractions on your doorstep, and there's an excellent choice of accommodation, from self-catering apartments to luxury boutique hotels and affordable guesthouses.

For a breath of fresh air and a magnificent view, climb Arthur's Seat, Edinburgh's own mini-mountain. After dark, take in a play at the Festival Theatre or the Traverse, a concert at the Usher Hall or go clubbing at The Liquid Room.

Inverness is an outstanding base for family holidays in Scotland. There are self-catering apartments, purpose-built holiday parks, and family-friendly B&B accommodation in the city and around the shores of the nearby Moray Firth and Loch Ness, where you can paddle on sandy beaches and look for dolphins, seals and the mythical monster.

Largs is one of finest destinations in Scotland for family holidays by the sea, with a long sandy beach and a pick of places to stay that includes family-friendly hotels and guesthouses, campsites and mobile home parks. For rainy days, there's Vikingar! combining a Viking heritage centre with an indoor leisure centre and pool.

Arran, in the Firth of Clyde, is the easiest of Scotland's isles to get to and with beaches, open-air adventures and a historic castle to explore when it rains.

For a cheap Scotland staycation, you'll find well-equipped holiday parks on the shores of the Firth of Forth, just east of Edinburgh. There are also holiday parks within shouting distance of the capital on the Fife coast.

On the west coast, there are well-appointed holiday villages, and caravan and camping sites near Oban and further north near Ullapool.

And if you're planning a really cheap holiday in Scotland, remember that you're allowed to pitch a tent anywhere in the Scottish countryside.

Holidays and weekend breaks in Scotland are no more expensive than in the rest of the UK. The cost of accommodation, food and drink, and holiday entertainment are roughly the same as in England, Wales, and Northern Ireland. Admission to many major museums and art galleries is free.

Are there coronavirus travel restrictions to visiting Scotland?

Coronavirus restrictions vary from region to region. For the latest advice, check the Scottish government’s advice before you book.

What do I do if my holiday to Scotland is cancelled?

If your holiday to Scotland is cancelled, you should contact your travel operator (if you booked through and agent) or your accommodation for further help.

Where can I fly to in Scotland?

You can fly to Scotland's biggest cities (Edinburgh, Glasgow, Aberdeen, Dundee and Inverness) from points in the mainland UK, Northern Ireland, the Republic of Ireland and the Channel Islands.

You can also fly from Scotland's main gateways to island airports including Islay, Kirkwall (Orkney), Sumburgh (Shetland), Stornoway (Lewis), Benbecula, and Barra (where flights land on the beach at low tide). Campbeltown, on the Mull of Kintyre, also has a small airport.

The flight between the remote Shetland isles of Westray and Papa Westray is the world's shortest scheduled air service – it takes less than two minutes.

Why Aberdeenshire is Scotland's next big thing

Read moreabout Why the Scottish Borders should be your next staycation
Scotland road trip: Taking the scenic route to Kintyre

Read moreabout Scotland road trip: Taking the scenic route to Kintyre
7 of the best UK cities to visit this year

7 of the best UK cities to visit this year